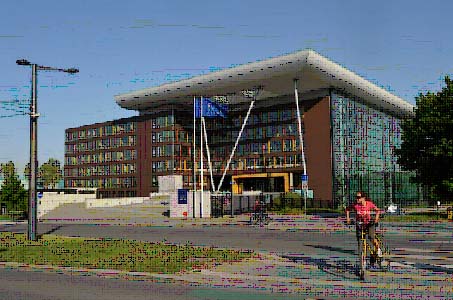 There were four representatives of the European Network Church on the Move, of which Catholics for a Changing Church is a member, at the June 2013 meeting in the spectacular Agora building of the Conference of INGOs (what we generally call 'the voluntary sector') at the Council of Europe:  Francois Becker and Fernard Jehl of France, Gerd Wild of Germany and Simon Bryden-Brook of the UK.   The Council provides the conference with expert simultaneous translations into French and English and this makes a great difference – as long as one understands the jargon.

We arrived on Monday afternoon in time for workshop on the important Human Rights recommendations which had been in preparation for some years under the guiding hand of our own Francois Becker; it required a tedious but necessary examination of a draft in French and English in order to submit a document for consideration two days later by the Human Rights committee before being present to the full Conference.

Tuesday morning was the open session of the Education and Culture Committee of the Conference of INGOs with some 80-100 people present.   Highlights were an excellent and full presentation by Richard Stock, European Network for Education and Training (EUNET) on the challenges of digital media education, followed by a shorter presentation by Mara Georgescu (Education and Training Division, Youth Department of the Council of Europe  on the No Hate Speech Movement and the Council of Europe campaign. 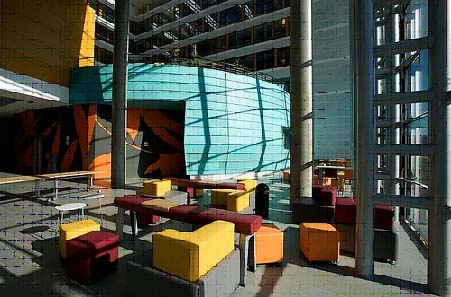 The meeting then broke up11.30-12.30 into four simultaneous working groups.  I joined a small working group on the subject of universal access to digital media.   There were seven of us present including  a Dutch school principal, an Italian lawyer, two journalists, and a woman who works with prisoners.   The working group aims to prepare a draft white paper for the January 2014 INGO meeting for later presentation to the Council of Europe in June 2014.

On Tuesday afternoon the Human Rights committee meeting, open to all delegates, took place.   The document finalised at the Monday working group was adopted after some minor modification for submission to the plenary session of the Conference for endorsement two days later.   The matter of violence against women was also discussed in some depth, as were sexual abuse of children, and inhuman or degrading treatment and punishment.

Wednesday morning was taken up with an open meeting of Committee on Democracy, Social Cohesion and Global Challenges.  There were some 80-100 delegates present, hearing presentations about the present situation in places such as Tunisia, Turkey and Syria, about regard being paid to human rights as climate change is addressed, with an address by the Rt Hon Jeffrey Donaldson PC, MP, member of the parliamentary assembly of the Council of Europe on good governance or large metropolises.  The afternoon and evening was free.

Thursday was given over to a plenary session with some 180-200 delegates present.   There was discussion of various aspects of the work of member organisations, the involvement of young people and the voluntary sector (NGOs) in the political process in various countries (Sweden, Ukraine, Montenegro and UK for example), future events, approving resolutions proposed by the three committees which had met in the preceding days, the working of the Conference of INGOs and its collaboration with the institutions of the Council of Europe. 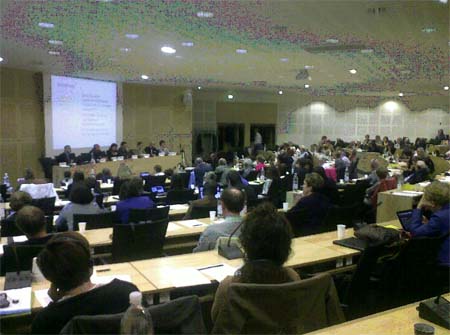 A huge quantity of paper in French and English was produced, revision after revision in many cases; there was lots of jargon.   This was a stimulating experience and a privilege to be an alternative Catholic voice to the hierarchy at one of the important political institutions in Europe.