After an excellent lunch, the Secretariat met at 3pm to timetable workshops on topics requested by members of the European Network.  The conference works in four languages and this small team sets up a programme which enables discussion, dialogue and full participation of all delegates. 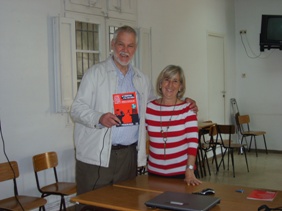 Catholic friends from all over Europe are gathering in Barcelona today for the 22nd annual conference of the European Network - Church on the Move.

Since the 20th annual Conference held at Mennorode, the G3i met five times ion Paris : 10 June 2010, 28 September 2010, 9 December 2010, 11 February 2011 et 26 April 2011. As it committed itself to do it, the G3i continued to enlarge itself in order to reflect more  the different cultures, convictions and schools of thoughts ion Europe. It welcomed this year a member of the Buddhist Union, an INGO awarded the participatory status of the Council of Europe.

The G3i was invited by AFAN (All Faiths and None) to contribute to the reflection on the creation of an european network of associations of different convictions, either atheistic, humanist or religious, with the aim to increase the exchanges and mutual understanding between them, and to prepare a platform that puts forward the shared values for the building up of Europe and the development of its social cohesion.

The G3i attended the meeting planned the 17th of March at Brussels where the first ideas of what this network should be have been discussed as well as the venue of a conference planned ion novembre december 2011 at Brussels where the G3i will be invited to intervene on the theme : “ Building trust between among communities and european citizens ».

2) Relations with the European Institutions